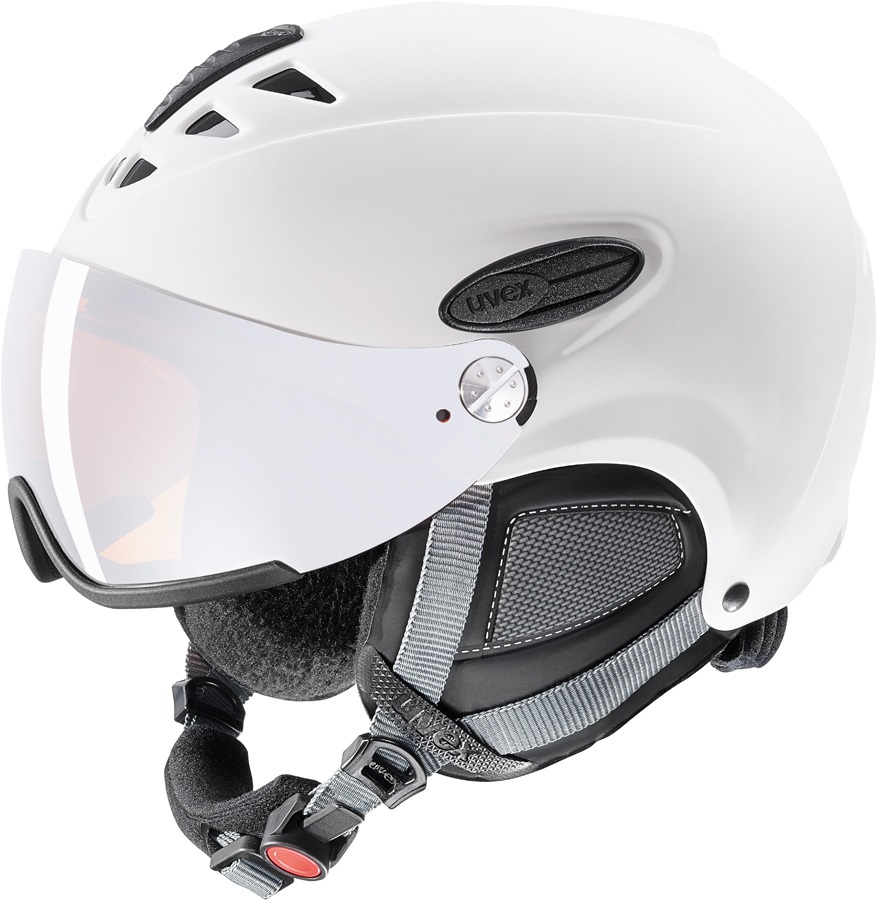 Colour: White
Brand Colour:Matte White
Gender:Adult Unisex
Visor:Litemirror Silver/Lasergold lite
Product ID: 164746   S56.6.162.1207 4043197288796
The Hlmt 300 ski and snowboard helmet from Uvex has a built in visor and has been engineered for superior all day comfort and top spec' protection.

The hardshell construction comprises of an injection moulded outer shell fixed onto an impact absorbing EPS inner shell made up of microscopic air chambers which absorb forces upon impact. It is impact resistant on the outside while being shock absorbing and insulating on the inside. The vents are placed to optimize the intake of cooling air while expelling exhausted hot air away from your head, the vents are adjustable so you can customize the cooling effect to suit your comfort levels.

The IAS dial fit system allows for easy size adjustments even when wearing gloves and the removable ear pads allow for a customized look or seasonal adjustment on those warm spring days. The anatomical closure button is smooth and simple to use and the Fast Adapting System webbing can be easily adjusted and they stay secure for a precise fit. The anti-allergenic liner is removable and can be washed to keep your helmet fresh season after season, all while providing moisture wicking to keep your head dry.

The visor is a Litemirror silver lens on a Lasergold Lite (S3) lens which removes harsh glare and distracting reflections while protecting the eyes from UVA and UVB rays. This visor also has an anti fog treatment to prevent the build up of moisture and ensure that you have crystal clear vision all day long.

The Hlmt 300 Visor helmet is a superb, comfortable helmet that is ideal for those looking for an integrated visor system, whilst retaining high levels of protection for skiing/snowboarding.
The Lowdown

I used this visor helmet for a week in the French Alps where temperatures ranged from -5 to -15 centigrade. Conditions ranged from sunny with no wind, to raging snow blizzards with ghastly wind chill. I wear spectacles under the visor. What I found is that there is not a great deal of room under the visor for spectacles. In order to close the visor you have to wear a pair of small close fitting spectacles otherwise the visor will rub against them and push them up against your face. Uncomfortable and not good for your spectacle coatings, not good for the spectacle frames and not good for the coating on the visor. Anyway I eventually found a pair of spectacles that I could wear. Definitely a poor design - with a bit more care it could have been a non problem. So if you are a spectacle wearer I would strongly recommend trying on the helmet before you purchase it. The visor system worked very well with my spectacles occasionally misting up slightly when stationary after skiing. As soon as you move off the misting disappeared. This is much better than with my old goggles which once steamed up were a nightmare. If you were not wearing spectacles I don't think there would have been any misting at all. The flip side of this good ventilation is that when it is very windy you do not get the same eye protection from wind chill as you would from goggles - there were a few moments during my week of intense cold around my eyes which was very painful. So if you are going to be doing a lot of skiing in very low temperatures with wind chill you may wish to avoid a visor system. The optical quality and feeling of openness was very good. The visor is tinted orange and so it worked well in low light conditions as well as in full sunshine. I found cold air was circulating around my ears and so I solved this by using a ski neck gaiter which I pulled up over my ears. By the way if you wish to remove the ear pads you have to grab them tightly between thumb and forefinger and pull down hard. In conclusion I have to say I liked this system and it was much better for me than goggles and I will be sticking with it.
By Mike

Used this helmet in Japan for 2 weeks in all conditions. I found it to be a great design. It was much less confining than ski goggles.with a very airy feel. I wore a balaclava all the time as I found the helmet a little drafty in very cold temps without a balaclava. Fogging was never a problem and neither was there a problem with falling snow finding its way to your eyes. The ease of being able to lift the visor with one finger was so much easier than lifting goggles. I have not been able to find any replacement visors yet, I hope Uvex will provide different mirrored tints in the future. Other than that I highly recommend this helmet.
By Mark
Close