Goal Zero give you a range of highly efficient portable solar power kits, torches, and travel power banks to charge and power a wide range of electronic devices no matter where you are in the world.

Founded in 2009, Goal Zero was established on the principle of Zero Apathy, Zero Boundaries, and Zero Regrets.  During his time in the Democratic Republic of the Congo, company founder, Robert Workman realised the need for reducing poverty lay partly in giving people the opportunity to empower themselves.  Robert gathered together a basic solar array with the goal of bringing a small, yet life-changing, sustainable energy source to a small rural community.  The project proved a success; and with it grew the idea of creating a range of portable, solar energy systems to bring a means of affordable energy to millions.

In the years that followed, the company grew to incorporate a range of innovative technology; in the form of personal solar chargers, lighting systems, and power storing devices.  Often aimed at supplanting a reliance on hazardous kerosene usage; and wasteful, and often costly single use battery cells.

The heart and soul of Goal Zero rests within the ethos of community empowerment and a sustainable future.  Their ability to fund such efforts has seen them introduce their long proven designs to the wider commercial market; balancing retail sales against development projects and disaster relief efforts - seen most recently in the wake of hurricanes Irma and Maria.

This ever growing range finds itself at home in the outdoor industry, as the perfect tool for those venturing off-grid.  And while some may view the outdoors as a refuge from the excesses of the modern world, there are many for whom the advent of portable rechargeable power allows a new level of freedom.  From everyday phone boosts and device top-ups, to emergency power-banks for recharging GPS, action cameras and tablets over multi-day backpacking trips and expeditions.  The technology is here, and through Goal Zero it brings a whole new dimension to outdoors adventure. 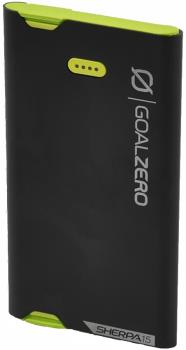