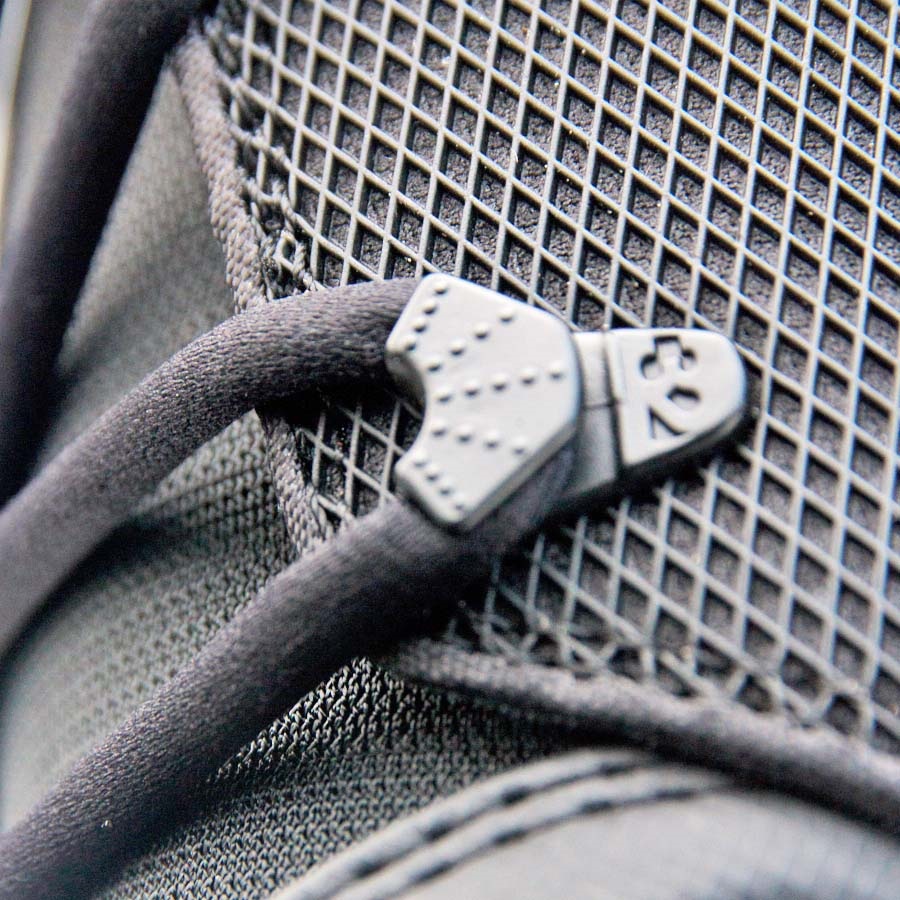 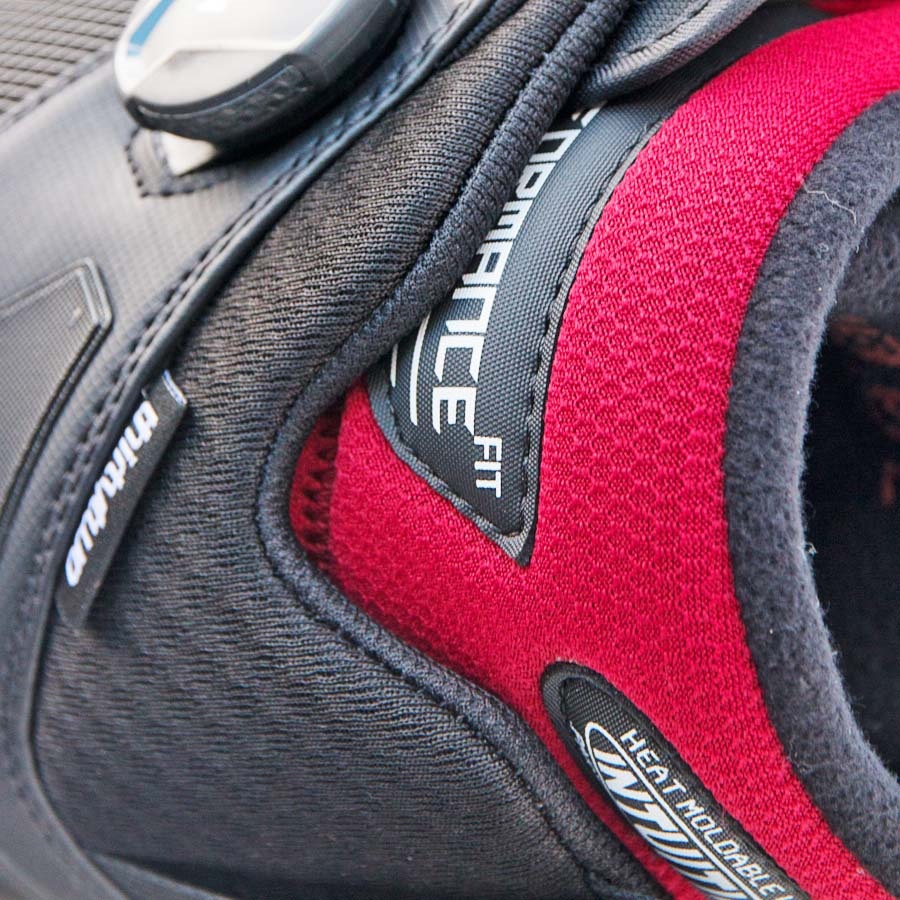 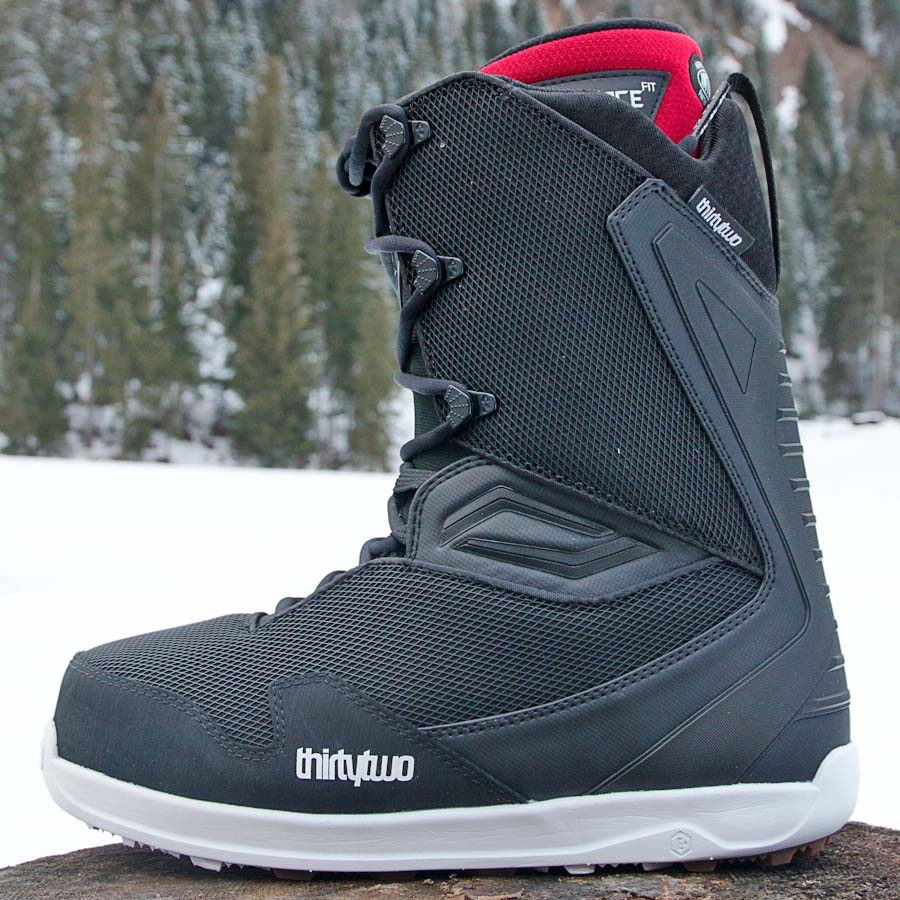 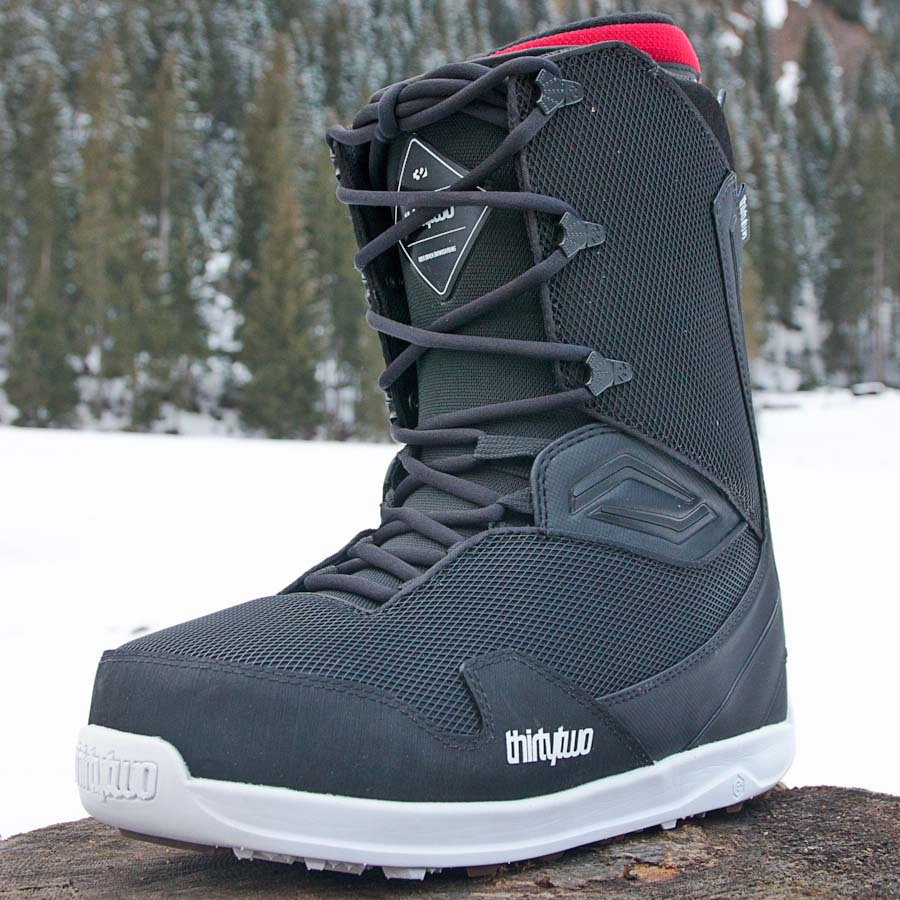 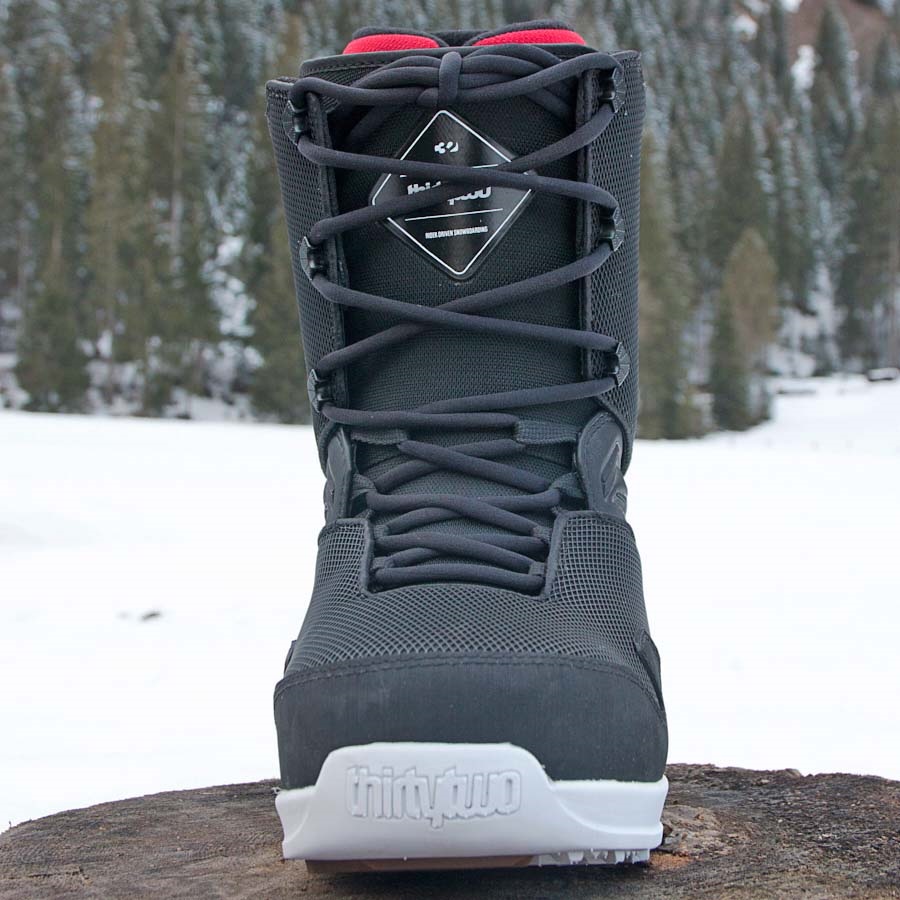 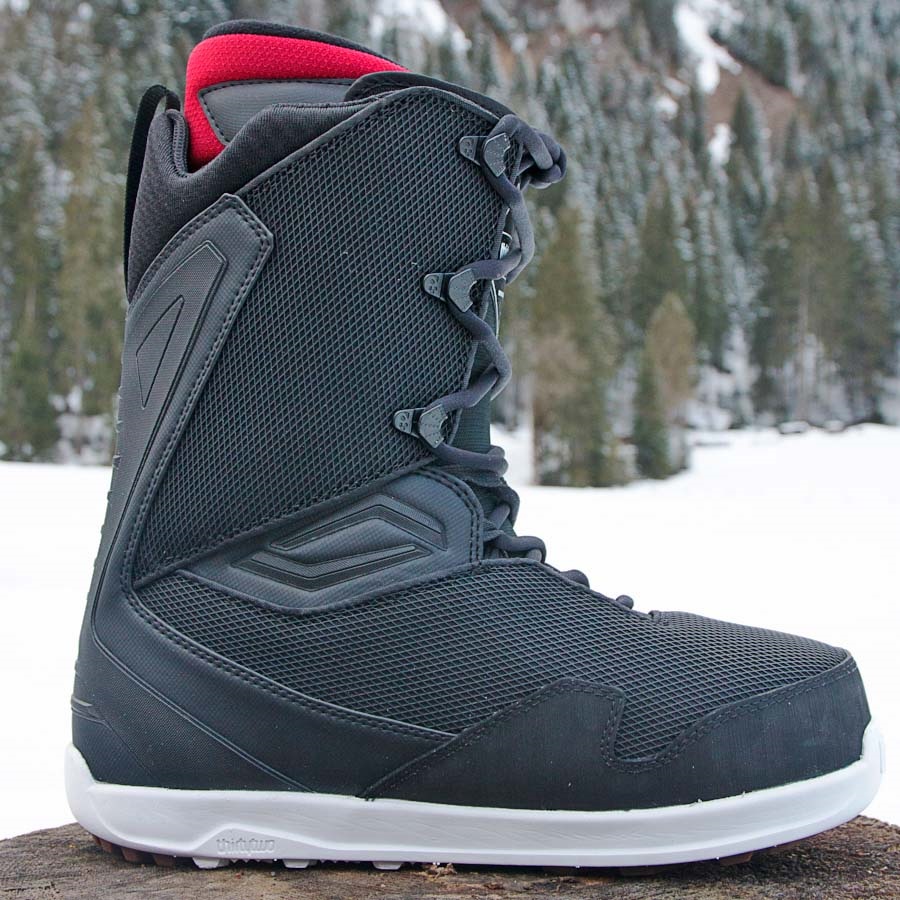 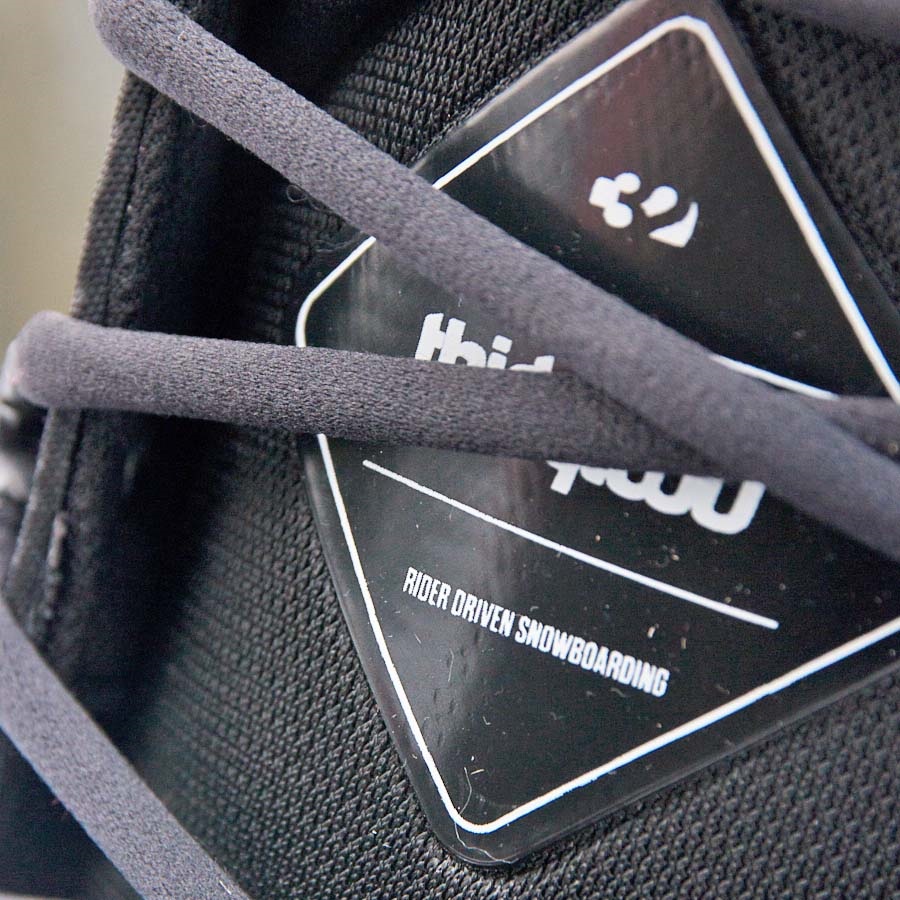 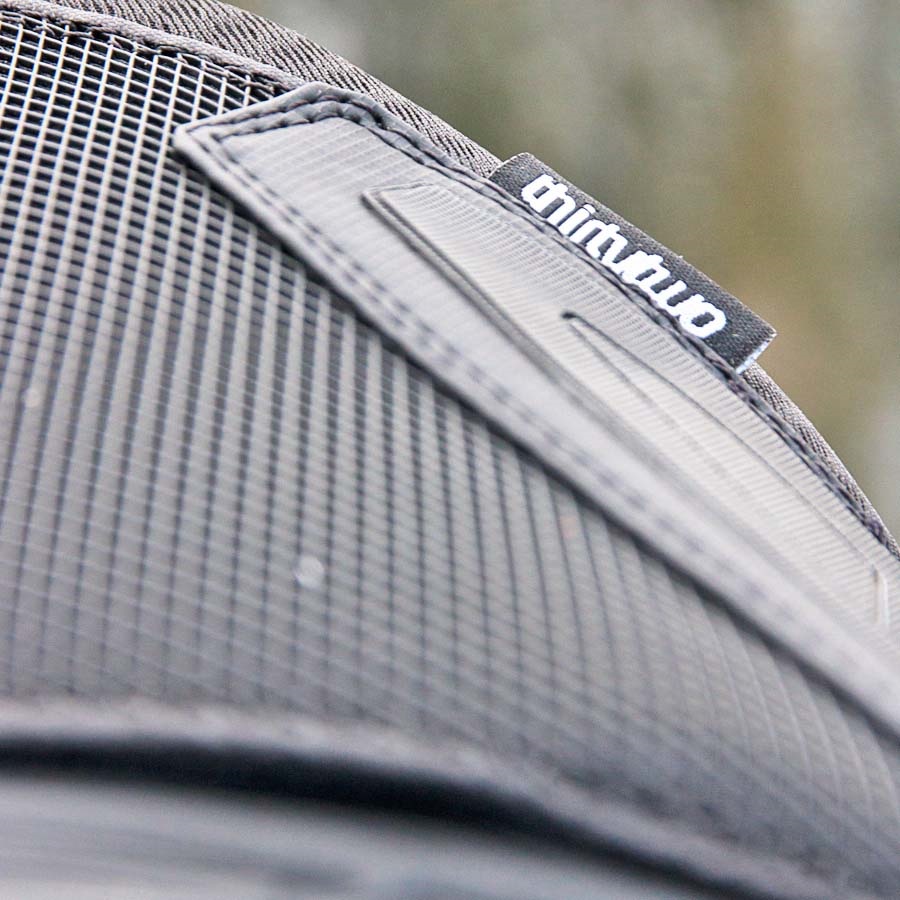 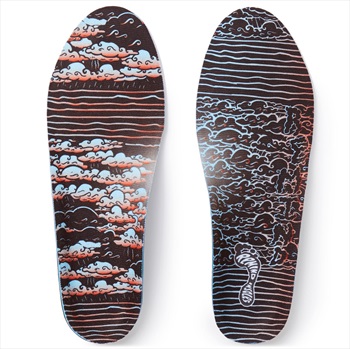 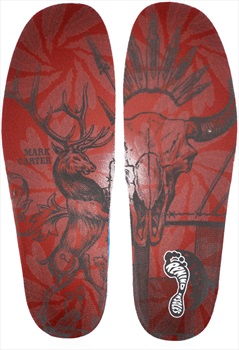 Colour: Red / black
Brand Colour:Red/Black
Year:2020
Product ID: 220831   8105000362603 889262813258
The 2020 thirtytwo TM-Two is a team rider favourite due to its superior fit and durability. This medium-responsive boot is a great all mountain freestyle boot with great response and perfect flex - meaning it performs on any terrain, from huge kickers and drops to jibbing and rail riding, and everything in between.

The Energy Foam outsole features performance rubber for superior grip and Energy Foam cushioning to help offer your feet some real protection on those big landings and icy conditions. The TM-Two is a perfect progression from the Lashed boot if you want a slightly stiffer flex and a high performance ride, with the same level of comfort you've come to expect from thirtytwo.

This boot has thirtytwo's premium Performance Fit featuring a Level 3 liner and footbed. A completely heat moldable liner uses intuition foam which conforms with heat to perfectly fit your foot. This works to reduce pressure points and enhance overall comfort, meaning you can keep riding for longer.

Performance Fit also means the TM-Two has excellent support by using customisable heel hold pockets, coupled with an internal harness to fully lock in the boot in the most comfortable and supportive position. The heel hold kit works on a pad system, as you simply peel, stick and stack the amount of pads you want.

The TM-Two has a 3D molded tongue and performance backstay that work to improve support and durability, reducing leg fatigue on the slopes. A clever tongue tension system keeps the foot centred and supported, while G2 gel provides temperature independent cushioning for more reliable impact reduction and comfort, even in adverse temperatures.

Overall a great boot for intermediate to advanced riders, the TM-Two from thirtytwo is packed full of tech and features that make it a versatile all mountain classic.
Features Include
The Lowdown

Yeh, these boots are just awesome!! Love how they fit so snug and keep your foot locked down. The liner has got incredible comfort padding and the boot obviously looks insanely cool! Had a great first week with these bad boys and looking forward to week 2 shortly!!!
By Sam

I used these boots for 2 weeks last season. They are fantastic. They were a little heavier than I was hoping for (they are still light boots) but the trade off for weight vs stability / response is fantastic. The boots have been a bit chafed by my bindings but that is probably more of a reflection on the bindings than the boot. They are very comfortable, and no issues with overheating or blisters and I experience almost no heel lift. Stiffness allows for decent response. Would certainly recommend.
By David

Great pair of boots! nice and firm, but has the ability to mould in internals to fit your feet snug. Love the lacing system, the ability to tighten down your foot and heel, while leaving the calf a little loose is really good. Quite a big boot on the board tho all round a good buy
By Jonny

Bought these boots a couple of months ago now, and have to say there seriously good boots. had a few sessions in them now and feel great! were a little stiff for my liking at first but quickly got used to the responsiveness of the boots. super warm super comfy super supportive and seriously good looking boots! Only bad point is that the colour on the camouflage ones seems to wear off really quickly, like after 2 hours of boarding, when i took my board off i realised that the colour had started to rub off where my binding were. no biggie though, don't effect performance. Very happy with my Boots.
By lee

A great looking boot, super comfy and will never have heel lift! At first I thought I'd be put off with the laces out side but really doesn't cause an issue for 'speed' it has zip laces underneath for the important part of the boot to hold you in tight. In fact it's better as you can adjust the flex on the boot ie top half or bottom half. Overall I'm Very pleased and I can finally rely on the boot so I can get different rides on the mountain and not have to worry/have doubt heel lift will occur.
By Wayne

Really good boots. These hold up pretty much anywhere. Not really into soft forgiving boots so these were perfect. Really light and the reduced footprint meant they felt much less bulky than other boots. Would highly recommend these for the mid-high range price bracket. A couple of things though. First is the sizing. I'm normally a 10.5 and my toes were pretty bunched in those so i swapped for an 11 and they were much better. Also, they take a while to break in so if you can get them molded do that.
By Tom

Good step up from the lashed

Coming from ThirtyTwo Lashed, which i loved to ThirtyTwo Sessions (not as much) to TM-TWO, I found the TM-TWO the best of lasted and Session. What i mean by that is the comfort of Lashed but the response of Sessions. My biggest gripe with ThirtyTwo is the laces, as they have a tendency to break easily. Also the TM-TWO i personally find have a slight pressure point across the top of my foot. Really recommend to get heat moulded properly. But overall they are great.
By Robert

This is my second set of TM-Two's and they are an amazing boot. The Lashed has got quite soft over the years so I switched to the TM-Two's and they are prefect. I have wide feet and the thirty two boots are always a great fit for anyone with big wide feet. The flex is quiet stiff at first but after a while riding the boots soften up to just the right amount of flex. They have quite an aggressive lean on the boots but I ride a lot of park in domes and on mountain and the boots have never given me a problem. They are a great boot as expected from thirty two. The review rating of 4 reflects the problems with buying online and if you want to heat mold them. I had to get a friends portable boot heater to get them to fit perfectly. It also reflects that the delivery from absolute snow was slower than expected.
By Dominic Owen

These are brilliant boots, solid. They do take a little longer to break in than others, but that's due to them being firm. Solid and powerful. Thumbs up.
By Ben
Close